Summary of the night

Story of the night
Those expecting concrete results and an early night following the exit poll were given quite a shock as Big Ben chimed. Another hung Parliament signalled a fascinating change in fortunes for the Conservatives, who were predicted by some to win 400+ seats back in April.

Initial seats in the North suggested that the exit poll may have over estimated Labour’s success, but as results began to come in, it became clear that Labour had performed much better than many expected.

Darlington, a key Conservative target, was comprehensively retained by Labour, shortly before Labour ousted Charlotte Leslie in Bristol North West, a bellwether seat expecting a strong Conservative return. This set the tone for the rest of the night.

There were losses for some big Conservative names including Ministers Ben Gummer, Gavin Barwell and Jane Ellinson. Meanwhile Canterbury fell to Labour for the first time since 1918. The SNP also had a difficult night, with Alex Salmond and Angus Robertson amongst the big beasts falling.

Until a new Government can be formed
In terms of the day to day functioning of Government, things will largely carry on as they have been during the last 6 weeks whilst the Government has been in purdah.

That said, the already weak pound plummeted again after the exit poll and Brexit negotiations are due to begin imminently. There will be added pressure on all those involved in negotiations to come to a conclusion sooner rather than later, or face severe economic consequences.

Theresa May will remain Prime Minister, and the Conservatives in Government unless there is a credible alternative; clearly though governing as a minority may not be sustainable for five full years.

Forming a new Government
The Conservatives will likely reach out to the DUP in Northern Ireland to support them as an effective minority. The two are ideological bedfellows and there is agreement on the need to increase the living wage, raise the personal tax allowance, and deliver secure and affordable energy for consumers.

In return, the DUP would possibly seek support for increasing digital government and building their target of a £1bn tourism industry. Ultimately though they would demand a seat at the table on Brexit in Northern Ireland.

This would be the most prickly area of negotiations, and the Conservatives would have to make concessions on Brexit for this deal to work. There is no guarantee any deal between the two would work, particularly with the current situation of no Government in Stormont; this does however seem to be the most likely of options at the moment. Together they would argue that they have a democratic duty to carry out the will of the people expressed last June in the EU referendum. Everything else is secondary.

It is hard to envisage the Conservatives forming an agreement with any other party, as there is no obvious unanimity between them and other parties.

Labour meanwhile will likely be mobilising the other opposition parties, the SNP, the Lib Dems and Plaid, to form a left leaning alliance that could outnumber the Conservatives, or step in if the Conservatives fail to strike a deal with the DUP.

Labour and the SNP could no doubt find common ground on policy areas, most notably Brexit. Both prioritise the strongest access to the single market, immediately guaranteeing the rights of EU nationals, retention of human and worker’s rights enforced by the EU, returning EU powers to devolved regions and ensuring EU structural funding levels are retained. Labour may be forced into pursuing a second EU Referendum on the terms of the EU Brexit deal. This could be divisive. It is not in their manifesto, but a number of the vocal, ‘remain’ moderates would arguably welcome the chance to undo last June’s vote.

With either of these options there is also the added constitutional issue of English votes for English laws. It would potentially mean that some ‘Government MPs’ would be unable to vote on certain legislation in England, adding a whole new dynamic never seen before in the Commons.

If neither party can form any kind of majority, it is likely that the Conservatives will rule as a minority government, seeking parliamentary majorities for individual votes. Opposition parties could, however, trigger a motion of no confidence at any time. We may even see another election before the end of the year if this does happen.

Leadership
As David Cameron’s former Head of Communications Craig Oliver said in the early hours of the morning, “this is the election that everyone lost”.

Theresa May has arguably rewritten the rules on how not to fight a General Election. A campaign fought on ‘strong & stable leadership’ has ultimately collapsed in a chaotic mess. It seemed the result would be a formality when the election was first called; the final result is a perilous indictment of her leadership. Her credibility is possibly irreparably damaged. She will have to take responsibility for this result. If she doesn’t go she may face a leadership election. There are rumours that Boris Johnson began phoning allies hours after the exit poll came out, moving for the leadership. The only boon for May is that there is not an obvious rival in waiting, with many having serious questions about Boris Johnson’s reputation as a statesman. She could also argue that resigning will just add another layer of instability. But with the embarrassment of the result she might go into self-enforced exile before she is pushed out.

Corbyn is the winner who lost the election. He is in fact not a laughable electoral force, as many have accused him of being throughout his leadership. The result is far better than many imagined. Any challenge to his leadership would surely fail if anyone is even brave enough to try.

He now has the challenge to press on from here and show that he can be as equally effective as leader of the opposition, as he has been as a campaigner this election. More than anything he has to demonstrate statesmanship for people to see him as a Prime Minister in waiting.

In Scotland, Sturgeon’ prolonged honeymoon has come to a crashing halt. She must now demonstrate that the SNP can govern Scotland effectively, as their record will be continually scrutinised. The result is also an order from the electorate to cool off on the independence rhetoric.

In what was first dubbed the ‘Brexit election’, the Lib Dems, the most pro-EU party, took a step sideways. Although no one can fault Tim Farron’s energy, his party will be questioning whether he has the strategic ability to haul the Lib Dems back into relevance, especially with Jo Swinson back in the picture after winning East Dunbartonshire.

Brexit
The election has failed to unify the country’s position on Theresa May’s plan for Brexit, even though this was one of Theresa May’s reasons for calling the snap election. A softer Brexit seems more likely. Nigel Farage went further stating that Brexit in its entirety is in jeopardy (adding that he may return to British politics to ensure Brexit is executed). If the opposition parties can unite on certain issues, such as single market/customs union access, or the final vote in the commons to agree on the Brexit deal, they may be able to alter the Brexit we end up with.

Independence
It is thought that one of Theresa May’s reasons for calling the snap election was due to the Scottish Conservatives rising popularity in Scotland, with the electorate growing weary of the SNP’s renewed, post-Brexit calls for IndyRef2. In this respect then, the election has been a success for the Conservatives, although it will mean little to the English and Welsh MPs who have lost their seats, and is owed in part to a greater than expected resurgence by Scottish Labour. Calls for another referendum will now dissipate over the next few years without disappearing. Calls for independence have been muted.

After a tumultuous night, Interel will be continuously monitoring developments throughout the rest of the day and the weekend. Be sure to follow us on Twitter @InterelUK . If you would like to speak to a member of the Interel team, you can contact us on 020 7592 3800.

Quickfire questions from the night 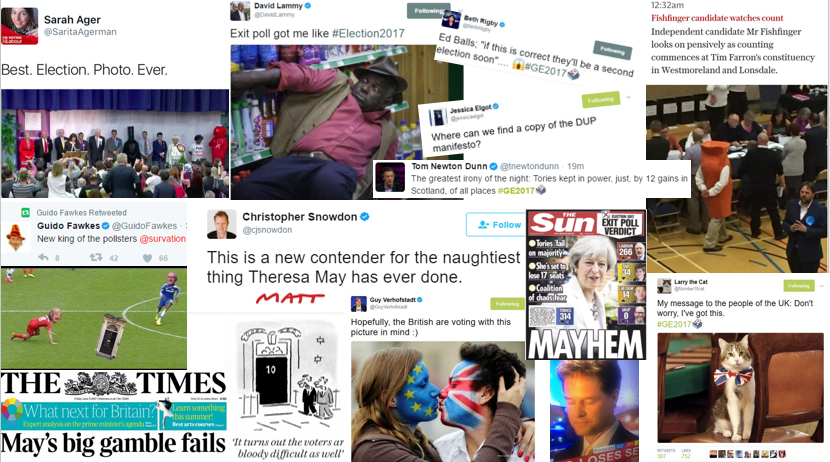